Construction of the Burj Khalifa began in 2004, with the exterior completed five years later in 2009. The primary structure is reinforced concrete. The building was opened in 2010 as part of a new development called Downtown Dubai. It is designed to be the centerpiece of large-scale, mixed-use development. The decision to construct the building is based on the government’s decision to diversify from an oil-based economy, and for Dubai to gain international recognition. The building was originally named Burj Dubai but was renamed in honor of the ruler of Abu Dhabi and president of the United Arab Emirates, Khalifa bin Zayed Al Nahyan, Abu Dhabi and the UAE government lent Dubai money to pay its debts. The building broke numerous height records, including its designation as the tallest building in the world. 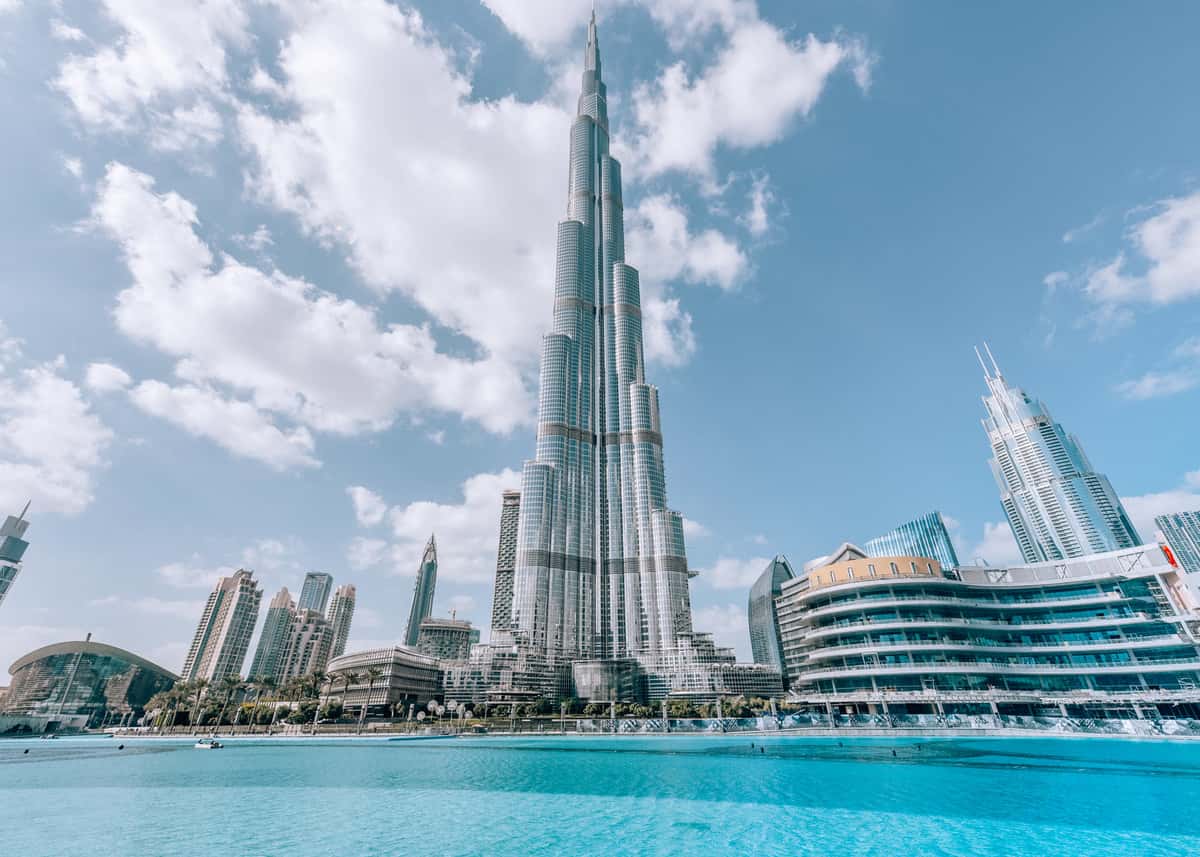 Hyder Consulting was chosen to be the supervising engineer with NORR Group Consultants International Limited chosen to supervise the architecture of the project. The design is derived from the Islamic architecture of the region, such as in the Great Mosque of Samarra. The Y-shaped tripartite floor geometry is designed to optimize residential and hotel space. A buttressed central core and wings are used to support the height of the building. Although this design was derived from Tower Palace III, the Burj Khalifa’s central core houses all vertical transportation with the exception of egress stairs within each of the wings. The structure also features a cladding system which is designed to withstand Dubai’s hot summer temperatures.

It contains a total of 57 elevators and 8 escalators.

At a certain point in the architectural and engineering process, the original Emaar developers experienced financial problems, and required more money and economic funding. Sheikh Khalifa, the ruler of the United Arab Emirates, granted monetary aid and funding, hence resulting in the changing of the name to “Burj Khalifa”. The concept of profitability derived from building high density developments and malls around the landmark have proven successful. Its surrounding malls, hotels and condominiums in Downtown Dubai have generated the most revenue from the project as a whole, while the Burj Khalifa itself made little or no profit.

Critical reception to Burj Khalifa has been generally positive, and the building has received many awards. However, there were numerous complaints concerning migrant workers from South Asia who were the primary building labor force. These centered on low wages and the practices of confiscating passports until duties were complete. Several suicides were reported.

The world’s tallest building, Burj Khalifa took 6 years for its construction and was inaugurated on 4th January 2010. The structure is 828m tall and the whole system is a reinforced concrete tower structure. This was the first attempt in world history to have such a large height for structures. This reason made the designers to employ one of the best and latest technology And innovative structural design.

The structure is located in Dubai, United Arab Emirates. The structural features include:

The tower comprises 2, 80, 000 m2 area. This area is utilized for 700 residential apartments located from 45 to 108 floors. Remaining spaces is till the 160th floor is occupied by the corporate officers. The total project cost is estimated to be US$20billion. The tower construction itself costs $4.2billion. The structural elements used and their amount is mentioned below: 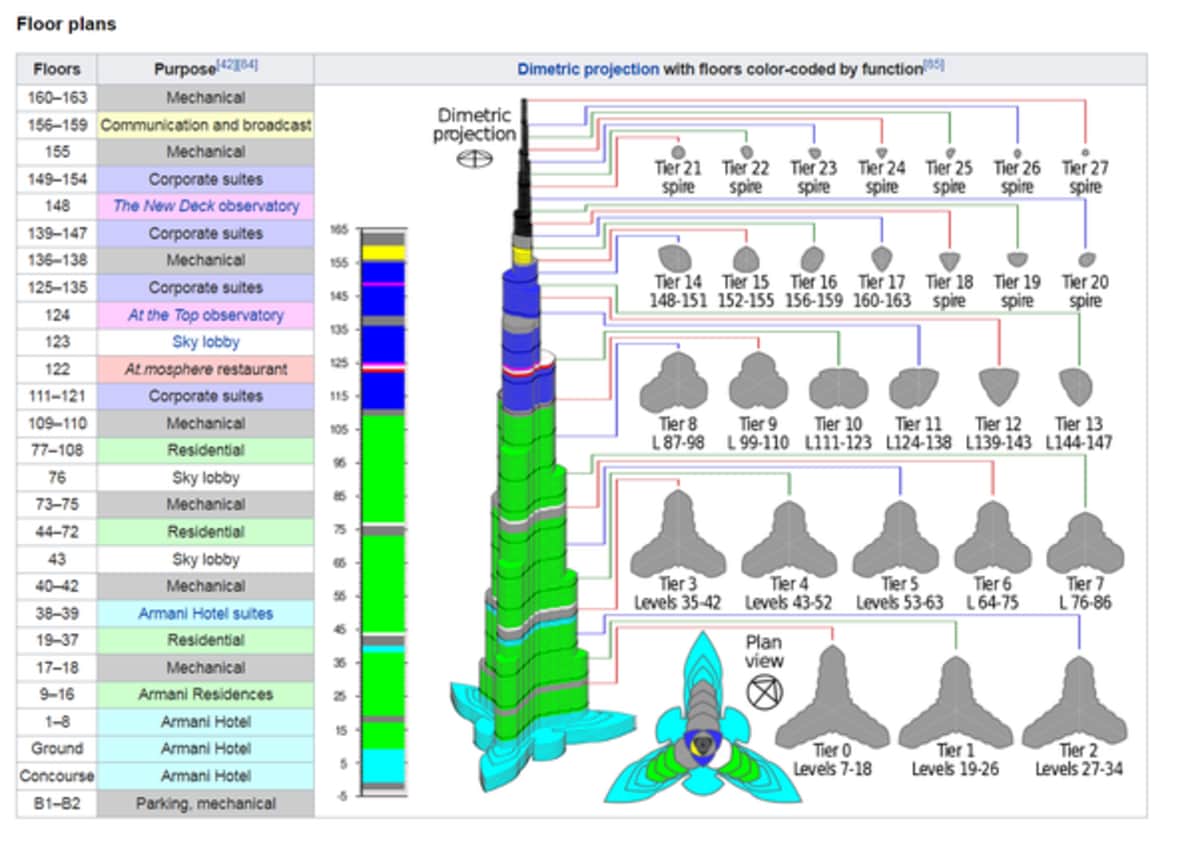 Shape of the Tower

Adrian Smith is the man behind the structural and the architectural design of Burj Khalifa. The basic structure is a central hexagon core with three wings, which is clustered around it.

While moving up along the tower, one wing at each tier is set back. This makes decreasing cross section when moving up. The structure consists of 26 terraces. 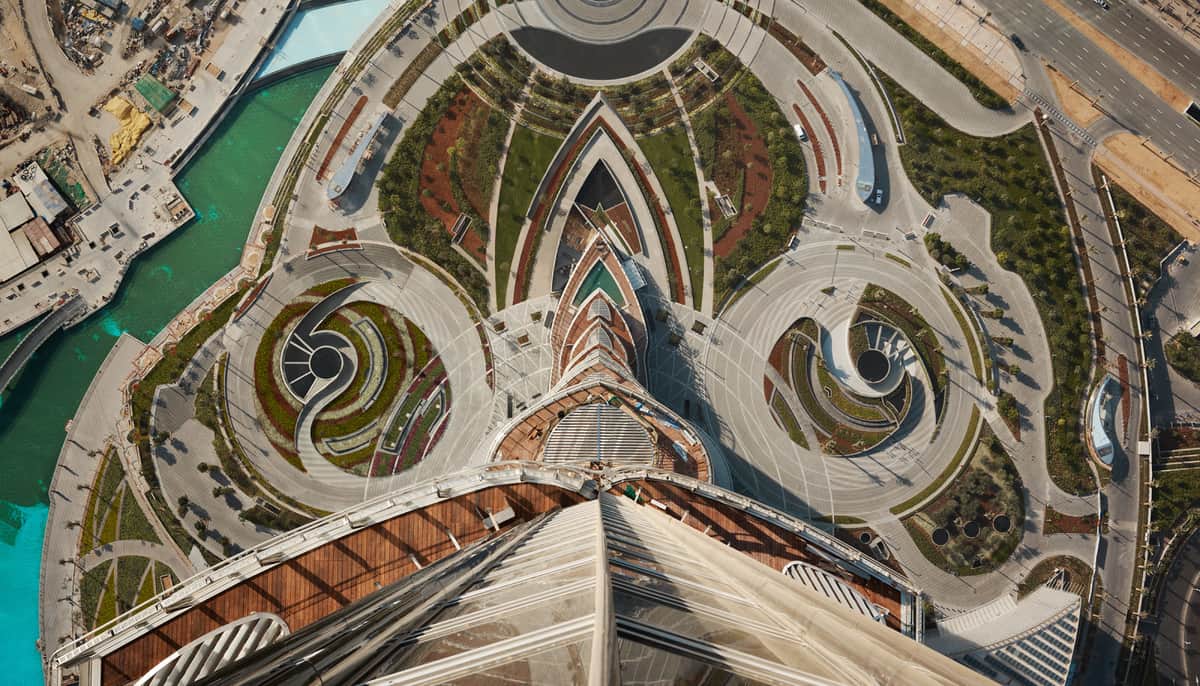 The Burj Khalifa employs a ‘Y’ shaped floor plan. These plans provide higher performance and provides a full view of the Persian Gulf. The shape and the upward setbacks help the structure to reduce the wind forces that is acting on the structure. The shape was finally fixed based on the series of wind tunnel tests. The structural system employed for Burj Khalifa can be called as the Buttressed Core System. The whole system is constructed by using high performance concrete wall. Each wing buttresses the other through a hexagonal central core. The central core has a higher resistance towards the torsional resistance.

The structure is more designed for wind force and related effects. There are corridor walls that extend from the central core to the end of the wing. At the end, these walls are thickened by means of hammer walls. These walls resist the wind shears and moments by acting like the web and the flanges of the beams. There are perimeter columns which are connected to the mechanical floors. The connection between the perimeter columns and the mechanical floors is provided by means of outrigger walls. This help to resists higher wind loads laterally. The outrigger depth is three-story heights. There is the periodic encounter of outrigger system through the height of the tower. The high-performance concrete used in Burj Khalifa guarantees low permeability and higher durability. The C80 and C60 cube strength concrete is used incorporating fly ash, Portland cement, and the local aggregates. A young’s modulus of 43800N/mm2 is said to be granted by the C80 concrete. The largest concrete pumps in the world were used to pump concrete to a height up to 600 m at a single stage. Two numbers of this type of pump was used.

As the temperature of the location (Dubai) is very high, there were chances of cracks due to shrinkage. So, the concrete pouring process was carried out at night at a cooler temperature. Ice was added to the concrete mix to facilitate the desired temperature. To withstand the excessive pressure caused due to the building weight, special concrete mixes were employed. Every batch was tested before placing.

The numbers of piles used were 194. The piles were 1.5m in diameter and have a length of 43m. Each pile has a capacity of 3000 tons. The concrete grade used in piles where C60 SCC concrete which were placed by tremie method. This utilized polymer slurry to carry out the process. To reduce the detrimental effects of chemicals, cathodic protection where provided under the raft. 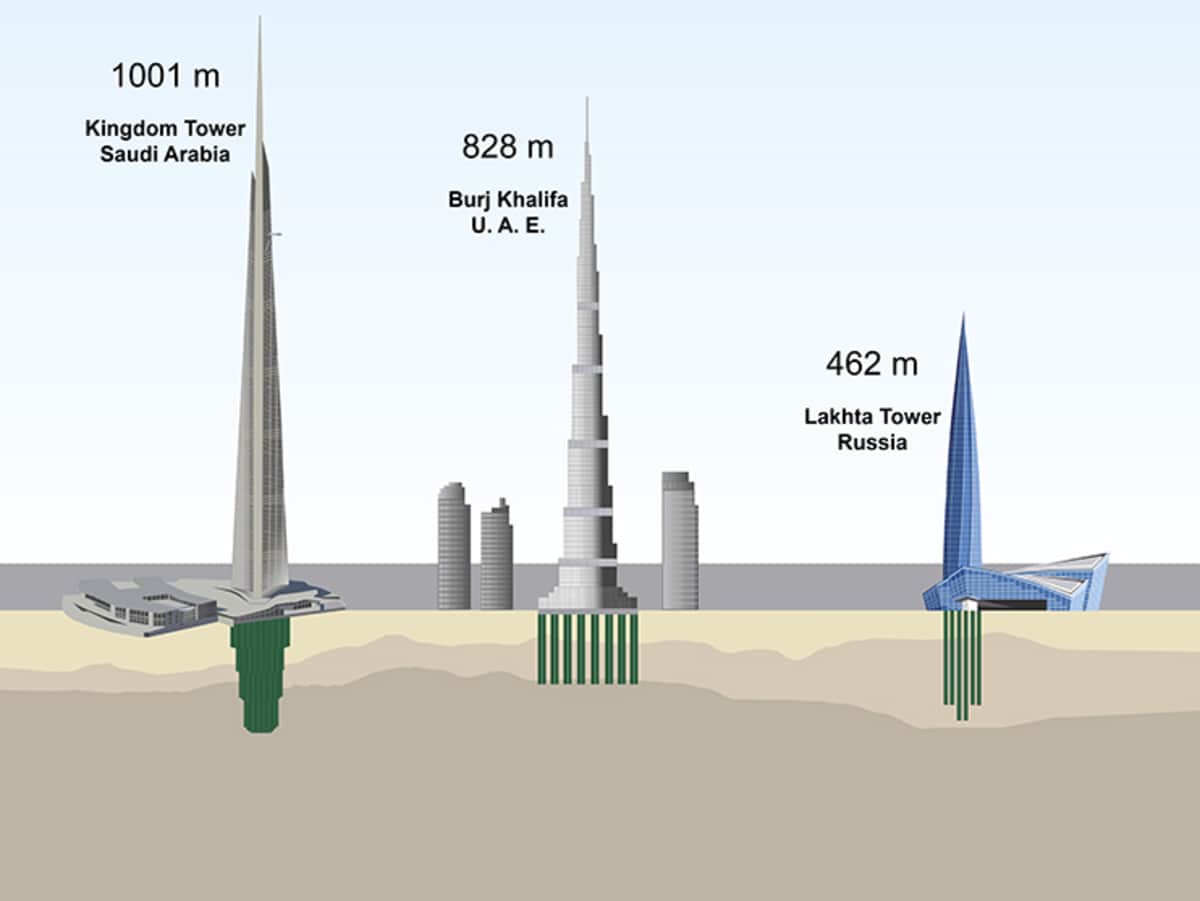 The Tower foundations consist of a pile supported raft. The solid reinforced concrete raft is 3.7 meters (12 ft.) thick and was poured utilizing C50 (cube strength) self-consolidating concrete (SCC). The raft was constructed in four separate pours (three wings and the center core). Each raft pour occurred over at least a 24 hour period. Reinforcement was typically at 300mm spacing in the raft, and arranged such that every 10lh bar in each direction was omitted, resulting in a series of “pour enhancement strips” throughout the raft at which 600 mm x 600 mm openings at regular intervals facilitated access and concrete placement.

The Burj Tower raft is supported by 194 bored cast-in-place piles. The piles are 1.5 meter in diameter and approximately 43 meters long with a design capacity of 3,000 tonnes each. The Tower pile load test supported over 6,000 tonnes. The C60 (cube strength) SCC concrete was placed by the tremie method utilizing polymer slurry. The friction piles are supported in the naturally cemented calcisiltite conglomeritic calcisiltite fomiations developing an ultimate pile skin friction of 250 to 350 kPa (2.6 to 3.6 tons / ft.). When the rebar cage was placed in the piles, special attention was paid to orient the rebar cage such that the raft bottom rebar could be threaded through the numerous pile rebar cages without interruption, which greatly simplified the raft construction. 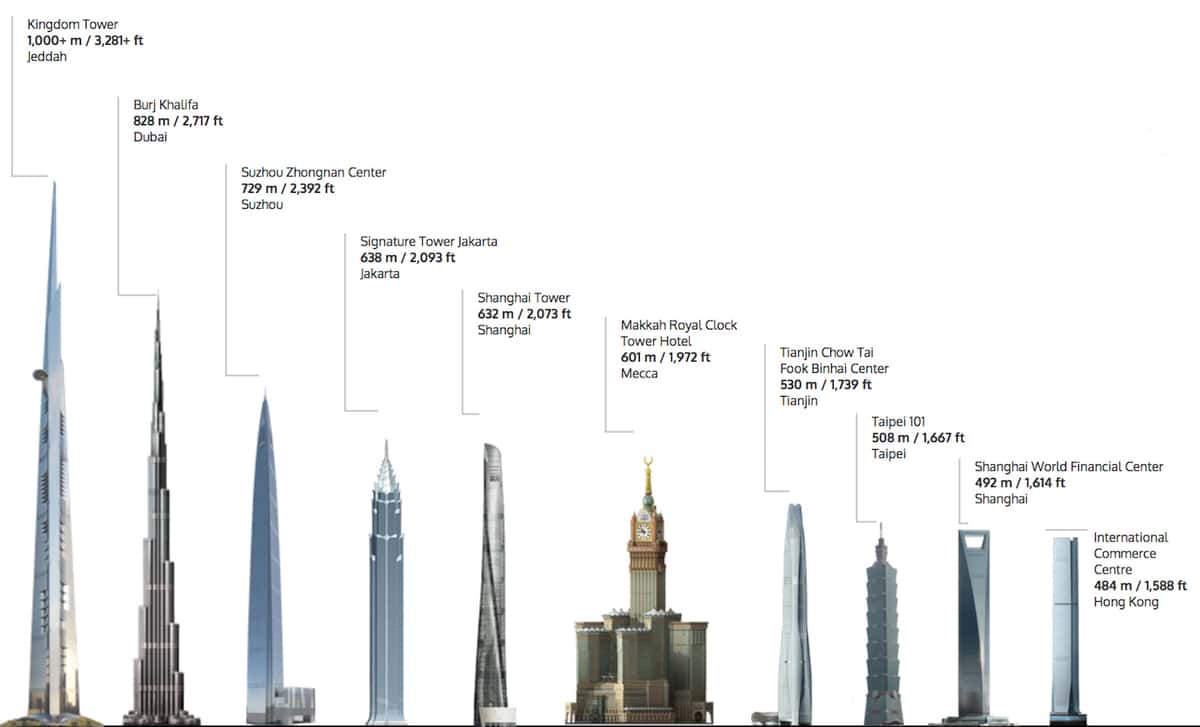 This article is written by Engr. Muhammad Nouman.

Who is a Civil Engineer by Profession. He loves to watch and read fact-based reality.