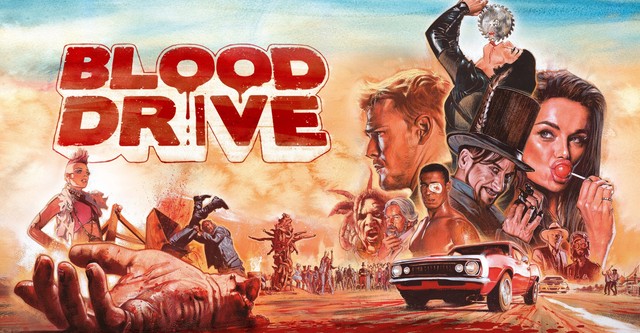 Blood Drive is an American science fiction action television series that aired on Syfy from June 14 to September 6, 2017. On the same day that the finale aired, series creator James Roland announced that Syfy had decided to cancel the series after one season.

Blood Drive is set in the dystopian “distant future” of alternate 1999, after the “Great Fracking Quakes” have literally split the United States apart, with a giant ravine called “the Scar” being formed roughly along the route of the Mississippi River. A megacorporation, Heart Enterprises, exploits strange discoveries from the bottom of the Scar to become ubiquitous across American politics, society, and the economy. Meanwhile, as a result of environmental decline, water has become scarce and gasoline prohibitively expensive.

The series features Los Angeles Police Department officer Arthur Bailey (Alan Ritchson), a.k.a. “Barbie”, who is forced to partner up with Grace D’Argento (Christina Ochoa), a dangerous femme fatale who has an agenda of her own, as they take part in a death race in which the cars run on human blood – the titular Blood Drive, whose master of ceremonies, Julian Slink (Colin Cunningham), is secretly a Heart employee. As they make their way through the Blood Drive, Arthur and Grace realize that Heart has been involved in their own pasts as well.