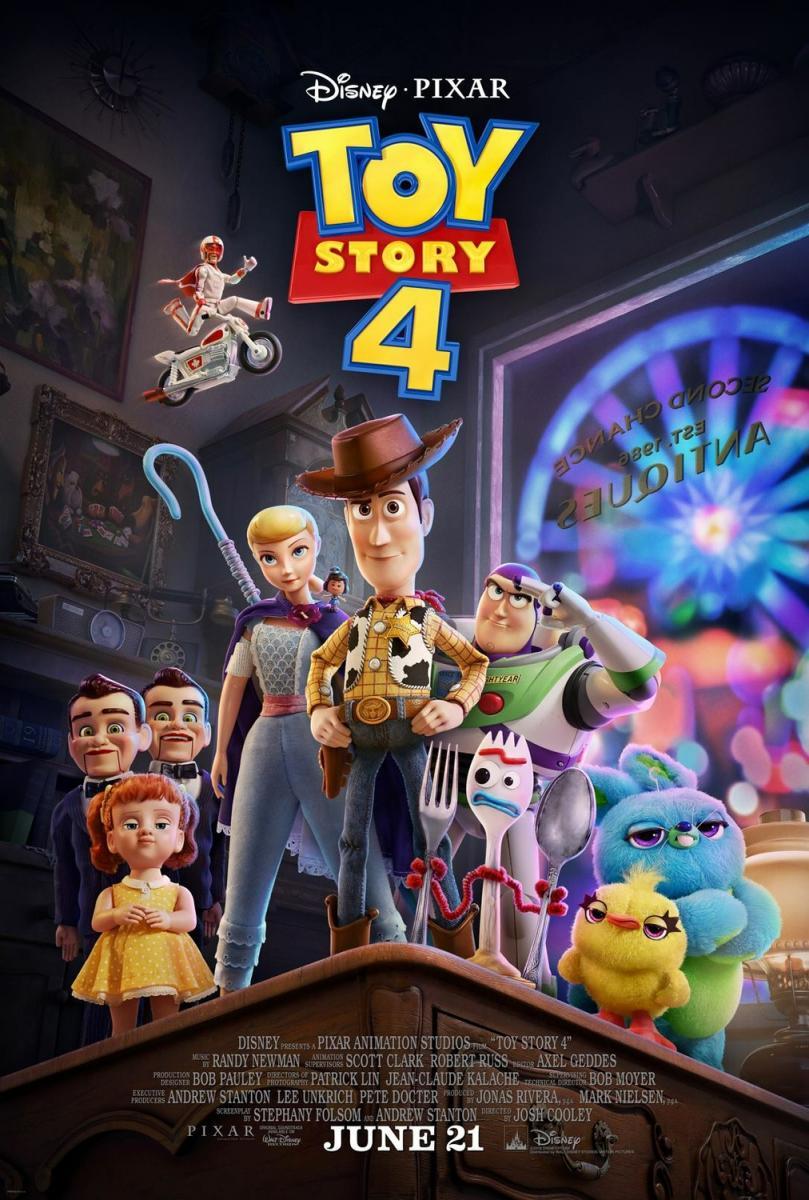 I remember Toy Story 4 as a moments movie. Sustained and constant during its first half, when they revolve around a specific character, one that represents the heart of the film — Are we the role we play? Can we change it? Can we live without her? — more sporadic during the second, when they revolve around a much more primary element: light, and the beautiful use that the second and third acts of the film make of it.

Moments is what Pixar has given me since 1995. In the films that I have liked least about the company, they appear isolated, disconnected, brief. In my favorites, those moments so perfectly define what the film in question is — to say some, the opening cut of Up, the flashback to the critic’s childhood in Ratatouille (and the use of abstract shapes to describe the act!) to create!), the stars reflected in Wall E’s eyes, and, to tie in with Toy Story 4, a chain of toys strung together in front of a wall of fire — that it’s almost not worth watching what comes next.

One thing happens to me: I think that if there is a metaphorical distance in the cinema between what the film is and what the film could have been, Pixar runs through it, spends half an hour at the finish line, and then returns to continue with the story. For the fourth time, a toy is kidnapped and it is necessary to team up to rescue it through a chain of ingenious situations, with an assortment of new characters to refresh the roster, with a villainess to defeat. He has a logical motive: he wants to have a female owner, and he will do whatever it takes to get it. But I see it a little more in keeping with what the Toy Story movies used to be, than in the new places that it was taking me. It is curious to see. I will not take it to the grave.

Now, is it an out-of-print movie? No. There’s no way in the world that I can say that a movie with a character like Forky is “ideally bankrupt.” No way, come on. And I will explain why. Forky, unlike his classmates, is the creation of a little girl. One whose existence is imbued through the pure childish desire to love. And Pixar shows me with a still shot of the face of the doll in question. And where before there was a collection of plastic, stick, rope and two crazy eyes of those, now there is a consciousness. And if I were to use a hyperbole, that moment is so simple and so honest that it seems Dreyer.

And it stays from there not only in form, but in content, because it turns out that Forky was born with a residual purpose: to throw himself away. It is a used fork/spoon/abomination and that is what usually happens to them after their usefulness is fulfilled. And during a marvelous montage, our protagonist, the cowboy Woody, struggles to stop Forky from fulfilling his goal because Forky has an additional value infinitely greater than what he was originally conceived for in a factory. Forky is there, like the guy from Artificial Intelligence, to love and to be loved.

Toy Story 4 spends its first three-quarters of an hour examining that circumstance — and not just with Forky: Buzz Lightyear begins to question his own consciousness as well through the set phrases engraved within himself; a false inner voice that sometimes contradicts his own desires -, which hides a double-edged sword that Woody is learning as the minutes go by, as he understands that his position as the girl’s main toy has become obsolete (and nothing half retreating as it happened in the first installment: this time it is completely serious), and tries to discover if a toy can survive without the affection of the little ones, by itself, in this world. Boop, a porcelain shepherdess discarded by the human family early in the film, plays an instrumental role in this dilemma, which the film addresses in its final minutes. In total, a good bunch of forty, fifty minutes, no chases, no jokes, no new characters, no winks, no pranks, no “go here to take this but be careful you don’t get caught.” You don’t need them at all. Just talk. A Randy Newman song for the little ones to digest the theme. looks. Introspection. It is an honest, sincere, simple, warm and responsible film when it talks about these issues. There is always a way out and you are never completely alone.

I find it super curious how I am reiterating that I could live perfectly in this film without one of the facets that I have always put on a pedestal when it came to Pixar, its immaculate genius in the design and execution of the action sequences. I keep writing this paragraph as I think about whether it’s something the movie wants, or something I want. And I do not know. I hope it’s the first.

But if, as happened to me, you disconnect at certain moments because some chase / jump into the void / capture at the last moment reminds you of one of the first three, try to pay attention to the light from the beginning of the film in its two main stages, an antique store and a fair. It is magical and the film knows it. Huge crystal chandeliers bathe our characters in a rainbow; a lone ray of light points the way through a fine cloud of dust, or when it blurs the colored lights of a night carnival into distant stars.

It is light used for a poetic purpose, which introduces our protagonists into a world much bigger than the four walls of a child’s room, where they may have one more chance to live. And the cat is awesome. Do I want there to be a 5? If they are going to tell me about the key W that opens the door X to get the thing Y that takes me to Z… it is possible. No idea. Probably not. Mark me as doubtful. If you are going to tell me about the difference between living and existing at the level at which this film moves in moments that I still remember a week later… give me five. Give me ten.