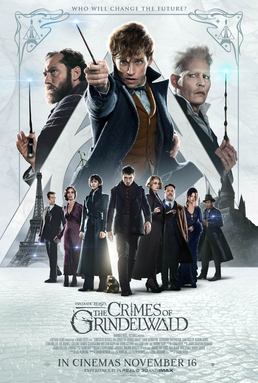 Fantastic Beasts: The Crimes of Grindelwald. Directed by David Yates

We are approaching Christmas and magic is making its presence felt in theaters two years after the Harry Potter universe was revived with Fantastic Beasts. If that first installment served to present an elusive and shy protagonist, a new villain and a kind of “chosen one” who is looking for his place in the world, this second part acts as a prelude to what should be, finally, the boss of this franchise. The Crimes of Grindelwald is, in a sense, a warm-up for a game yet to be played and, like any warm-up, it lacks an epic plot, something that David Yates and J.K. Rowling try to compensate with punctual and somewhat elaborate moments of action that underpin the true support of this film, the expectation.

The film starts with a brutal scene, the best of the film, in which Grindelwald escapes to arm the wickers of his rebellion. A rebellion built little by little based on a dialectic more seductive than authoritarian, tracing a direct link with the dawn of the Second World War. But not only that, a fairly clear parallel is made with the current political moment and the difficult balance between stopping fascism and being faithful to rules that the most intelligent fascists know how to snake and play in their favor.

Being clear about this portrait of evil, totalitarianism and the contradictions that their struggle entails, the film seems to get lost in everything else. An overly choral cast and a story full of subplots about the characters’ past get tangled up in the wheels of The Crimes of Grindelwald. Newt Scamander himself is slipstreaming, which makes a certain amount of sense in that he is someone who wants to stay neutral until he can no longer dodge the conflict, but who in turn undermines his target throughout the movie, which, honestly, is very vague, as was the case in the first installment.

The two films seem to suffer the consequences of having a very competent director, but perhaps exhausted, like David Yates, who has had no less than six Potter films; and, above all, a J.K. Rowling that, as much as she is the owner and lady of this universe, she is not a screenwriter with boards. A novel allows many ramifications, parentheses and, ultimately, narrative freedom, a film of this type asks for a more focused story, more action and less exposure. Beyond offering an excellent start and a remarkable climax, the rest is a bit of a mixed bag.

All in all, The Crimes of Grindewald meets the minimum that a fan expects from this saga, knows how to truffle the story with enough “magic confetti” to make it seem like more is happening than is actually happening, takes advantage of the magnetism of several of its characters and actors, especially Grindelwald himself and the young Albus Dumbledore (although it is more secondary than expected), and already leaves the ground ready for the conflict to start definitively (which after two pseudo-prologue movies, it is already time ).